Nia Pettitt is a force to be reckoned with. At the tender age of nineteen, the half-English, half-Zimbabwean model has built an online community of young women who share her passion for honouring and embracing the beauty of natural Afro hair.

Her fans are spread across the world, united by a shared celebration of natural beauty and a mutual adoration of Nia’s own golden mane. As FroGirlGinny, she shares tales of her adventures and hair care tips to over 330,000 Instagram followers, part of a growing movement inspiring a generation of young brown girls to defy Western beauty standards and nurture their natural Afros.

I met her at the Lisbon leg of her ‘Go With the Fro Tour,’ a joint venture with fellow model and social media influencer Lauren Lewis that gives women with natural hair a chance to come together and share stories of their own natural hair trials and triumphs.

First things first, are you Nia? Are you Fro Girl Ginny?

I’m a Gemini, so I’m everything, but I like to be known as Nia.

From 3 to 11 I relaxed my hair, but I didn’t do that out of seeing pictures in magazines, I just did it because my mum couldn’t handle my hair.

I grew up in a white area of London, so my idea of beauty was blonde hair, blue eyes, like my best friend in Primary School at the time.

Then, when I went to Secondary School, there was a girl with curly hair there and I idolized her, and I just wanted to have hair like her.

I know the feeling. I’m half-Kenyan and half-English, so I’m definitely familiar with that duality, and I think it’s something a lot of people from mixed heritage struggle with. For me with my hair, my Mum’s White, and I don’t think she’d ever really dealt with Afro hair before, so I mainly had dreadlocks or a shaved head. So, what was the spark that made you want to embrace your natural hair?

It was seeing that girl, her name’s Yasmin, seeing her curly hair, and then seeing a picture of myself when I was three. I had this Afro, and I was like, “Mum, why doesn’t my hair do this anymore?” and she said if I wanted it I had to big chop my hair, so I just did it the next day, cut off all my relaxed hair.

That must have been quite tough. Did you cry?

That’s impressive. I’ve definitely cried about a big chop. How did it feel when you had natural hair after so long with relaxed hair?

At first, everyone in school highlighted that they liked my straight hair more, but I’ve always been a person who doesn’t depend on anyone to love me besides myself so that just sparked the journey for me of being my own woman and growing up a lot quicker than most 11-year-olds.
But I was also concerned about what the hell I was going to use. I was buying mousses from Superdrug and conditioners from Tesco and I didn’t know what to use.

That was a tricky one for me too. What do you think of the state of the Afro hair industry in London?

I think we still have a long way to go, and I feel like I’ve been able to impact change in my small way, but I want to concentrate on deeper issues for women.
When I big chopped my hair, it started the journey of self-love, and I want to go into more of that than just giving hair tips. I feel like there’s more to me than just hair.

Absolutely. It’s impressive that you’re already on that journey. I think a lot of people take maybe another 20 years to start on the self-love journey, and the superficial is a way to deter from dealing with what’s underneath. That being said, did you feel as though the media was representing you and people who looked like you when you were growing up?

I don’t think it did. I mean, we had Scary Spice, but her name alone, Scary, doesn’t connote anything pretty.
We had Alicia Keys, but she was braided most of the time, we had Chaka Khan and Diana Ross, but mostly they weren’t in my era. It was mostly Scary Spice for me, that was all I had at the time.

So who did you look up to?

I think Hilary Banks, but she obviously had perm rods and flat irons, but I loved her style.

I still do! So you’ve transformed from being a young girl looking up to people into someone whom young girls look up to. What’s that like?

I always try to be humble because if the Internet broke down, I would still be who I am today. I try not to let it all get to me because it could be taken away at any moment.
So I just want to inspire people to live their lives to the fullest and travel more, and also to let young people know that the situation they’re in now is not forever. We have so much ahead of us. I mean, it feels nice, but I try not to let it get to me.

But it must hard because you do have a big social media following. How did you build that brand? Do you enjoy that aspect of your work?

It was honestly really natural. I just started posting pictures and it grew. I do enjoy it, the only thing I don’t enjoy is when my gemini mind wants me to capture everything and the other half is saying enjoy the moment, so it’s about finding a balance between the two.

Of course. And how did the idea of the Go With The Fro tour come about?

Me and Lauren met through Instagram and we wanted to do something together, and just came up with Go With The Fro, and it just grew from there.
It’s been a year now and we’ve got 40,000 followers, and we’ve travelled around Europe, we’re going to Africa on Saturday, so it’s taken off so quickly. 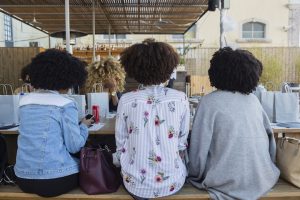 What’s been a highlight?

Every time I meet these women, it’s so fun for me because some of them have never been to a natural hair event, so they leave with this new energy to connect with other women and love themselves more. I love those aspects.

So it’s the human connection?

You’ll have to wait and see…
I just want to travel more, tan more, and my hair to get bigger!

Actress Thandie Newton and make-up artist Kay Montano met nearly 10 years ago on a shoot for UK Vogue (see ‘Our First Shoot Together’ post here). Since then a strong friendship has grown out of countless professional collaborations in fashion, beauty, red carpet, on stage and screen.